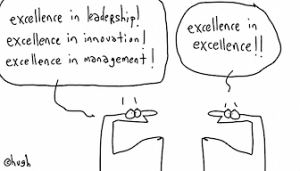 The latest and greatest buzzword is Innovation, (henceforth to be known only as the “i” word in this forum.) It seems that our senior executives are now talking-up the “i” word which is not a bad thing I guess, however it tends to stop at the talking.  A while back, the phrase the “bureaucratisation of Innovation” popped into my head. Now I don’t know where it came from, whether I unconsciously plagiarised it or I dreamed it up myself it matters not, it’s appearance was timely.

It comes at a time when the use of the “i” word in business and government is at its peak. I’ve known few words during my previous life in the public sector that have invoked such consternation, misunderstanding and outright fear. When we speak of the “i” word, we speak in glowing terms of the potential it offers but we forget the other side of the  equation involving implementation and the change that engenders, and as a result we go no further than talking about it.

We’ve all heard bureaucrats spruik the “i” word and tell us that we need to think differently and that we need to be challenged, however when the challenges come, very little changes in the modus operandi of dealing with them. We default to the linear and structured approaches of the past. New and creative approaches are shunned and when this occurs, the “i” word remains little more than a buzzword.

The use of the “i” word in many cases amounts to little more than a form of ‘bureaucratic chicanery’ in which words, glossy brochures, heavily moderated social media, internet portals and talking about action, substitute for action itself. The Aust Federal Govt’s not so recent 2020 summit proved a nice example of the bureaucratisation of the “i” word. I just don’t know that many of the thousands of ideas generated there have been appropriately harvested or moved to impactful action, but the event was certainly talked up!

When you can look under desks in organisations and see rolls of butcher paper gathering dust that contain post-it-notes full of untested ideas, you know that the “i” word is a buzzword.

In environments where everything is first viewed through a lens of risk it is extremely difficult to gain the permission required to undertake the thinking, experimenting and actions needed for the “i” word to happen. In large organisations too, those more likely to challenge the status quo and attempt to do things differently are the ones most likely to be sidelined and disempowered, and again where this happens the “i” word is just a buzzword. (We learned very quickly in the public sector that those who stuck their head above the parapet with challenges to the status quo, soon lost it)!

So, while our most pressing challenges are not adequately addressed and remain intractable, our senior leaders continue to speak eloquently of that “i” word and the potential it offers.

I first drafted this post 9 years ago and thought I’d revisit it to see if anything had changed.  You be the judge ….